Under the blessings of the late His Majesty Sultan Qaboos Bin Said and the guidance of His Majesty Sultan Haitham Bin Tariq, the youth program was developed to empower the Omani youth and prepare them to benefit further from the opportunities created in the 4th Industrial Revolution.

Led by His Excellency Dr Ali Qassim Jawad Al-Lawati, Advisor for Studies and Research to the Diwan of Royal Court and Chairman of the National Youth Program for Skills Development (NYC), the program is designed to equip and build young Omanis with the required skills necessary to exploit opportunities presented to them along with an advisory committee consisting of young people aged between the ages of 15 and 29 years old, from various backgrounds of education and work experience. 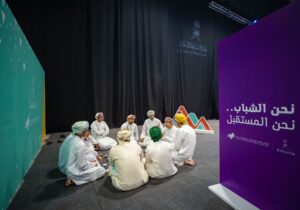 In order to provide a high standard of skill development training, the program has partnered with several top institutions, both locally and internationally in the field of education specializing in the latest innovations and practices, including Google, GUtech, National University of Singapore and Nanyang Technological University, to name a few.Last year, the NYC partnered with  Microsoft,  to provide hands on training on technologies like Artificial Intelligence and Internet of Things, ensuring the youth have all the necessary skills to take up the digital future in Oman.

Various events have been held to motivate the participants including the Omani Youth Day, celebrated on 26 October each year and an Omani Youth Tech Ideathon, which brought together around 600 participants with the goal of proposing 100 achievable startup ideas to be implemented in Oman, helping society and thereby  the national economy.

The Al Shabab Scheme allows participants between the ages of 18-29 years old to present their startup ideas as well as implement them into real time projects. Upon selection into the top 1000 participants, online training is provided for a period of 3 months. On completion of the training and on meeting the necessary requirements, the ideas are then presented in the ‘Omani Youth Tech Ideathon’, where the top 100 participants qualify for a 6 month within and outside the Sultanate to hone their entrepreneurial skills.The scheme then ends with the evaluation, implementation and the final preview of the project. 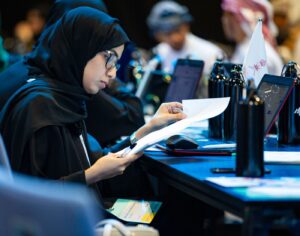 The Al Nashia Scheme allows students between 15 and 17 years old from schools across the Sultanate to apply and aims to introduce them to the basics of programming and gradually develop smart projects and applications using the skills being taught over three stages. Around 15,000 students are allowed to participate and taught the programming basics in stage one. 600 participants move on to the next stage where they apply everything learnt into individual projects. Finally, the 200 students are give the opportunity to be a part of the residential program on the GUtech campus for a period of two weeks, concluding with a two-day hackathon event.

With training from some of the top institutions, the Omani youth are being skilled in the latest technical skills in addition to the academic knowledge provided by the schools across the Sultanate.The country is prepared to be driven by a powerful generation ready to turn challenges into opportunities , thereby integrating the sustainable development goals towards a self- sustained future for the country.

With the high oil prices in the 1970s, the Sultanate of Oman was able to introduce various initiatives forSiteOrigin Editor the betterment of the people.Under the guidance of the late His Majesty Sultan Qaboos Bin Said, the Human Development Index (HDI) which was just 0.39 in the early 1970s, went on to reach 0.796 in 2015 due to the rise in per-capita income, nearly doubling in 40 years and thereby enhancing the well-being factors within the country.

With varying oil prices in the recent years, the reliance on oil sectors was sought to be reduced and economic diversification was seen as a viable option with the oil sectors contribution expected to decrease from 40.5% of the gross domestic product to 35.6% between 2016 and 2020.

The National Programme for Enhancing Economic Diversification (Tanfeedh) was an economic initiative started to ensure both public and private sectors had a part in the government’s economic diversification plan as fixed by the ninth five-year plan in line with Oman’s Vision 2040.  Lifting the dependence away from the oil sector, five sectors namely agriculture and fisheries, logistics and transport, energy and mining, and tourism were focused on as alternate sources of  national revenue. 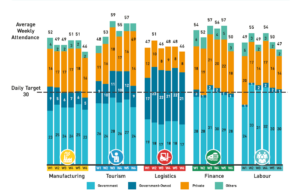 Based on the Malaysian Performance Management and Deliver Units (PEMANDU),technical support to the Secretariat General of the Supreme Council for Planning (SCP), Tanfeedh was  structured slightly different from the earlier diversification initiatives implemented in Oman. It focused on gathering opinions and viewpoints of various government and private sectors, academia and civil societies and allowed the general public to track the progress taken towards the initiatives.

Discussion labs were organized in 2016 over a period of 6 weeks with around 250 participants from different backgrounds who were invited to attend and take part along with the sector experts, facilitation team and central lab team.The outcomes from the lab were presented to the  public at an exhibition as well as through social media, newspapers, radio, television and an electronic survey on the Tanfeedh website.

The key performance indicators (KPI) discussed in the labs were gathered and finalized with time bound action plans. The Implementation Support and Follow—up Unit (ISFU) was set up and took the role of a monitoring body to ensure a smooth project implementation process along with coordinating with everyone involved. The final stage involved verification and publication of results as well as an annual report with the results brought about through the implementation of the Tanfeedh initiative.

The outcomes have been mixed but have included many successes within the various sectors involved. Within the manufacturing sector, enhancement of the Sohar Cement Factory to increase cement manufacturing locally met 80% of the target progress, whereas 100% of the target for 2017 was met in the Koso Gulf Valves manufacturing plant, Al Taj Cement plant and the One Million Date Palms innovation project.Projects were completed in the tourism and logistics sector with 9 out of 35 KPIs met in the tourism sector and 7 out of 31 KPIs met in the logistics sector by 2017.SMEs were developed in the job market and employment sectors, with the maximum targets being met in the business, environment and finance sectors achieving 21 out of 35 KPIs by the year 2017. 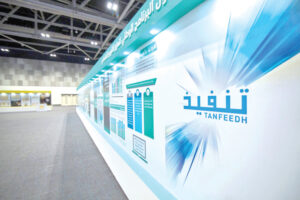 A significant change brought about by the Tanfeedh initiative was bringing all electricity related activities along with the gas and power sectors under the Ministry of Oil and Gas as proposed by the Energy Labs held in 2020.Along with various other innovations and projects, a minimum output power generation from renewable sources of 11% was decided upon to be achieved by the year 2023.

The government’s initiatives have been successful in creating a plan for the future of the country. Keeping in mind the demographic patterns, resources available and job opportunities being created, the Sultanate of Oman was commended by the International Monetary Fund (IMF) for the Tanfeedh programme’s contribution to the economic diversification plan casting a positive outlook on the country’s future towards attaining SDG 8,Decent Work and Economic Growth.