Oman’s plans on diversifying the energy sources within the country has come a long way with Miraah Solar Project using advanced technologies to meet the energy demand in the Amal oilfield,

located in the South of Oman as well as the various other efforts being taken by the government in this regard.

The first large-scale wind farm in the GCC region had been delivered by Masdar, an energy company based in Abu Dhabi. Construction on this 50MW project began in 2018 and commercial operation started in late 2019, with the Abu Dhabi Fund for Development (ADFD) fully funding the wind farm.The Dhofar Wind Project has also gone on to achieve international recognition winning the ‘Wind Power Project of the Year” award at the Asian Power Awards in 2019.

This award winning farm is located in Harweel near the Thumrait plateau in the Dhofar Governorate. Thumrait was preferred as it has a lower elevation, thereby having a larger air density and higher wind power. With minimal direction change and almost steady wind coming from the south of Oman, Thumrait was chosen among the rest of the locations for the wind farm.

Consisting of 13 wind turbines each with an electricity generation capacity of 3.8MW, developed and provided by GE Renewable Energy with infrastructure and electrical transmission facilities taken care by Spain’s TSK,  each wind turbine has rotor diameter of 130m and a tower height of 85m.Keeping the weather conditions in mind, a gas-insulated transformer power substation and a 132kV transmission line was built for the domestic power demands. 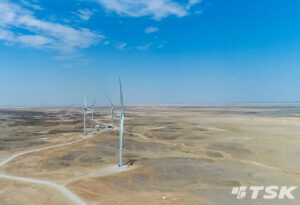 Oman Power and Water Procurement Company (OPWP) is to purchase the generated power from the Rural Areas Electricity Company of Oman (Tanweer), who will then be responsible for the power plant on completion of the project.

The farm is expected to generate enough electricity to power 16,000 residences, enough for about 7% of Dhofar Governorate’s total electricity needs and is likely to reduce an estimated 111,000 tonnes of CO2 emissions every year.

According to the OPWP’s 7-Year Outlook Report for the 2019-2025 timeframe, wind energy output depends mainly on seasons and is available in the evening and night than compared to the daytime, with average wind speeds of 7-8 meters per second.

Recently in the month of July 2021, the Dhofar Wind Project achieved a new generation peak of 30GWh, the highest power generation since its commercial operation in 2019 with an average wind speed of 12.6 meters per second.

Future plans for the low-carbon energy sourcing have been considered in smaller schemes in Sharqiyah, Al Duqm and Dhofar Governorates, including a wind-based Independent Power Project (IPP) of around 100MW in Sharqiyah South Governorate to be completed by 2023.Offshore wind farms in the Arabian Sea are also being taken into consideration as part of the diversification process.

By 2025, the Sultanate of Oman aims to produce at least 20% of the energy required for the development of the economy from non-carbon sources, in line with the country’s efforts alongside the Sustainable Development Goals (SDGs) to reach 30% clean electricity by 2030.

For a downloadable copy:Dhofar Wind Farm

One reply on “Diversifying Energy Mix in Oman-Dhofar Wind Project”