With a global ranking of 27th in the world for gas production, Oman is constantly growing and adapting with new technologies and methods being tested on a regular basis in the field of renewable energy.

The oil and gas sector is considered to be a major industry in the Sultanate of Oman with the government accounting for 29.16% of the total gas production and the remaining for oil production and export.With reservoirs of easily extracted light oil being rapidly depleted, heavy crude oil is the only option but requires heating of the reservoirs to reduce oil viscosity and allow it to be pumped to the surface.Enhanced Oil Recovery (EOR) technologies are being used to bring out this oil which has further led to increase in energy demands in the sector.Greenhouse gases being emitted are also a cause of concern.

Steam is injected into the oilfield at a high pressure to make it less viscous and flow better, thereby making it easier to be drawn at the surface. This process, also known as thermal method of recovery using steam injection, allows the oil to be recovered more efficiently at such a large scale. 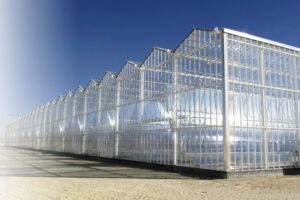 The Miraah Project located at the Amal oilfield in the south of Oman, is a 1,021 MW solar thermal facility and is one of the world’s biggest solar plants with regard to peak energy output.The project generates 6,000 tons of solar steam for internal oil production, mainly used for meeting the EOR requirements on the field.

The project comprises of 36 glasshouse modules using large mirrors in line with GlassPoint’s solution to concentrate sunlight and boil oilfield water to steam. The entire set up is enclosed in greenhouse structure to protect the system components from sand and wind and also enables the use of thin and lightweight components, providing better cost savings, reducing material usage and enhancing performance when compared to the exposed solar structures elsewhere.The construction began in October 2015 with the first four units being completed and ready for use in February 2018 with a total capacity of over 100MW delivering 660 tonnes of steam per day.

The enclosed trough technology is a concentrating solar power (CSP) technology which uses parabolic mirrors to focus the sunlight and harness energy. A major advantage of using CSP technology is that it can be installed in addition to the existing fossil fuel power plants, allowing for increased efficiency without major changes in the plant and systems setup. This harnessed energy boils the water in once-through steam generators (OTSG) to produce steam.In addition, the glasshouse roof is strategically placed approximately 6m above ground level, thereby reducing the soiling rate by 50% compared to the use of conventional solar designs where mirrors are placed 1m above ground level.

Miraah, Arabic for mirror, aims to generate real In-Country Value, creating job opportunities for Omanis and securing an overall gas savings for the country. It has the potential to create new opportunities in supply chain development and manufacturing with plans on localizing the supply chain under development. The project also aims to save 5.6 trillion British Thermal Units (BTUs) of natural gas yearly, which can be used to power residences for around 209,000 people in Oman. It is expected to reduce CO2 emissions by over 300,000 tons.

Oman is certainly on the global renewable energy map with the development of this project. Coming third in the CSP technology globally after Spain and the United States of America, the country is moving towards adopting more efficient ways to meet the growing energy demands and using the natural gas being saved for industrial development and power generation in line with SDG7: Affordable and clean energy.