Since the year 2019, the Al Hajar Al Gharbi mountain range in the Al Dakhiliyah Governorate has been given the status of a natural reserve. Located in Jabal Shams with peaks towering up to 3009 metres and spread across 387 square kilometers, this particular area is a haven for astronomers, star gazers and photographers owing to the area’s clear skies, free from the lighting effects of the urban population.

What truly makes this special is that this is not just another natural reserve for protecting the local species of fauna and flora. This is the first reserve in the Gulf region to protect a area from the detrimental effects of light pollution, thereby promoting star gazing tourism and allowing photographers and nature enthusiasts to capture the wonders of the world above without the disturbance of the artificial light from nearby settlements.

Article 1 and article 2 of the Royal Decree no. (40/2019) allows for the Ministry of Environment and Climate Affairs (MECA) to issue regulations concerning its establishment and work with the concerned authorities in laying out the guidelines for its management and upkeep. This has also allowed them to work wonders in the area by protecting the endangered Juniper trees, the Arabian Oryx and the birds that frequent the area.

Some other steps have also been taken to reduce light pollution within the country. The Smart Street lighting project has been initiated with support from Oman Municipality, IMTAC and Signify.

This project is said to use 13,000 smart LED lights and 370 smart remote controls to give up to 85% energy savings, reduce carbon emissions and also cut down on maintenance costs. 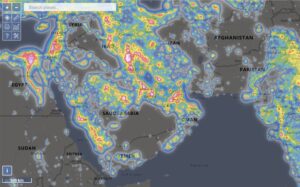 Light pollution is usually overlooked by many and not considered to be a serious problem. According to a National Geographic article, light pollution is the the effect of bad lighting design, allowing artificial light to focus outward and upward, instead of shining downward.This in turn affects humans, wildlife behavior, astronomical studies and the economy.

Also known as photo pollution or luminous pollution, it occurs in various forms.Light trespass, also known as spill light is when light unintentionally illuminates the surrounding areas where its not wanted or needed.Glare is another common effect which when bright light, more than what are eyes are used to, creates a discomfort in our visual sensation.Sky glow occurs when artificial lights are emitted into the atmosphere and create a dome-like orange glow over the night sky.And finally, light clutter is the excessive grouping of bright lights mainly from advertisement sign boards causing confusion and distraction.

Although it may seem to be unimportant, the effects photo pollution has on us is manifold. Our body has developed to a set pattern of a 12 hour day/night cycle. The cycle is part of our circadian rhythm and is greatly affected by the presence of light, disrupting the production of melatonin which is responsible for regulating metabolism and our immune responses.

Wildlife like birds and turtles depend on the natural light to move and become disoriented with the presence of multiple artificial lights leading to thousands of unnatural deaths.

Similarly, so much money goes into powering the street lights we use, when around 30% of the light emitted actually travels upward. More lights are used to power the street, when shielding fixtures could be used to allow light to fall where required, thereby reducing the number of street lights and the power consumption along the street.

Lighting management plan is essential in every developed and developing countries. Simply turning off lights when not in use, using shielding fixtures, switching to warm lighting LEDs and using blinds on windows can help reduce the light being directed to the atmosphere. Human health and so much more can benefit when taken seriously, consequently helping achieve SDG 15-Life on Land